Whitman County was formed with land taken from Stevens County in 1871.  It takes its name from Presbyterian missionary Marcus Whitman.  Whitman died in 1847 when Cayuse Indians, upset by deaths from measles in their community, attacked the mission near Walla Walla.  In 1883, Whitman County gave up land to form Adams, Franklin and Lincoln Counties, leaving it with its current configuration.

Located near the southeastern corner of the state, Whitman County is bordered by Spokane and Lincoln Counties to the north, Adams and Franklin Counties to the west, Garfield, Columbia and Asotin Counties to the south, and the Idaho counties of Benewah, Latah and Nez Perce on the east.  It covers 2,178 square miles, of which 19 are water.  The County’s population has fluctuated over the years, with the 2010 U.S. Census showing 44,776 county residents.  The 2017 estimated population is 49,046.  Colfax is the County Seat and Pullman the largest community.

Incorporated in 1873, Colfax was named for U.S. Vice-President Schuyler Colfax.  Located at the confluence of the North and South Forks of the Palouse River, the city sits surrounded by the wheat fields of the Palouse region.  The original court house was built in 1889, and a grand structure it was.  Unfortunately, it was demolished and replaced in 1957 by the current brick block seen above.  With a 2010 population of 2,805, Colfax has remained almost the same size since 1910.  Until 1930, it was the largest community in the County.  Some of its notable attractions include the Codger Pole, a 65-foot tall chainsaw-carved pole.  The pole depicts the heroes of a 1938 football game between Colfax and St. John.  It is the largest monument of its kind.

The city’s most popular park is Schmuck Park which contains a skate park, swimming pool, baseball diamond, track, and picnic facilities.  Citing flood control as justification, the City lined the Palouse River bed with concrete, begetting the popular name for that water course, the concrete river.  In its history, Colfax was infamous for two separate lynchings which took place when mobs overtook the jail (in the basement of the old courthouse) and threw their victims off the second story–with ropes tied around their necks.  These incidents happened in 1894 and again in 1898.  In the latter case, the mob hanged the wrong man.  You can read all about it here, and also see photographs of the old court house.

Fifteen miles down the highway lies the County’s most populous city, Pullman.  The old joke used to go somewhat like this.  Washington towns were up for new state institutions.  Lakewood got the mental hospital.  Walla Walla got the prison.  Pullman lost.  It got the state university.  Founded in 1890, Washington State University is a land-grant institution with branch campuses in Spokane, the Tri-Cities, Everett and Vancouver, as well as an internet based “Global Campus” which came into being in 2012.

Today, Washington State University (colloquially known as Wazzu) is the primary economic engine in Whitman county.  Roughly 74% of the population of Pullman are students.  Only 6,500 of the town’s 29,799 residents (as counted in the 2010 US Census) live in town full-time.  One could argue that the student population skews the entire County.   Politically speaking, Whitman County was the only eastern Washington county to vote for Same-Sex Marriage (Referendum 74 in 2012), for legalization of marijuana (Initiative 502 also in 2012), and for Hillary Clinton in 2016.

Elberton and other Whitman County Communities

Roughly thirteen miles northeast of Colfax, you will find the only ghost town in Whitman County.  Elberton got its start in 1886 when Sylvester Wait platted the town and named it for his son, Elbert.  The town grew up around the railroad and by 1900, it counted 400 residents who were able to shop at either of two stores, grind their flour at the mill and store their grain at the warehouse, get their horses shod at the blacksmith, post letters at the post office, and attend church, if they were United Brethren.  But in what would seem a series of Biblical catastrophes, including fire and flood, the town withered, and with the Great Depression, died.  Today only the church remains, and it is shuttered.

The University aside, Whitman County is primarily an agricultural land.  Crops, for instance,  include wheat, barley, lentils and dry peas.  The average size farm is 1,222 acres and wheat alone accounts for 486,853 harvested acres.  Driving the back roads of the County, you drive through seemingly endless fields of wheat or barley, and the occasional cow.  Cattle, however, don’t make up a large portion of the agriculture here.  But of all the farms I passed, the barn shown above has to be one of the most unusual.  It is located just west of the town of St. John.

Steptoe Butte, visible across central Whitman County, rises to an elevation of 3,612 feet between Oakesdale and Colfax.  Set aside as a State Park when Virgil McCroskey donated 120 acres in 1946, the park has since grown to over 150 acres.  The parks gets its name from Colonel Edward Steptoe, U.S. Army.  Steptoe led a disastrous foray from Fort Walla Walla which ended with the Battle of Pine Creek in May, 1858.  For an in-depth article on Steptoe and the battle, check out this post in History Link.   Geologically speaking, the peak stands as an island of quartzite dating back 400 million years.  The surrounding Palouse is basalt not more than 15 million years old.

The park is one of three state parks in Whitman County, the other two being  Central Ferry State Park on the shores of Lake Bryan (Snake River) and Palouse Falls State Park, the entrance to which is actually in neighboring Franklin County.  Steptoe Butte and Kamiak Butte form the Steptoe and Kamiak Buttes National Natural Landmark, so designated for their geological significance.  Ironically, the namesakes of the two buttes were the leaders of the opposing forces at the Battle of Pine Creek.

I have posted a portfolio of the photos I took on my drive.  Click here to go to that Behance.Net portfolio. 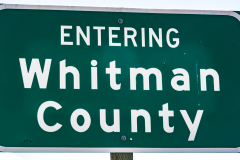 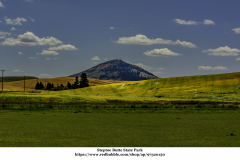 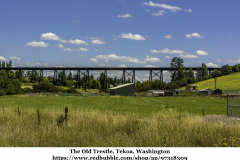 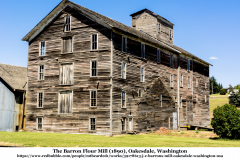 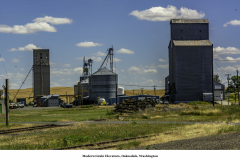